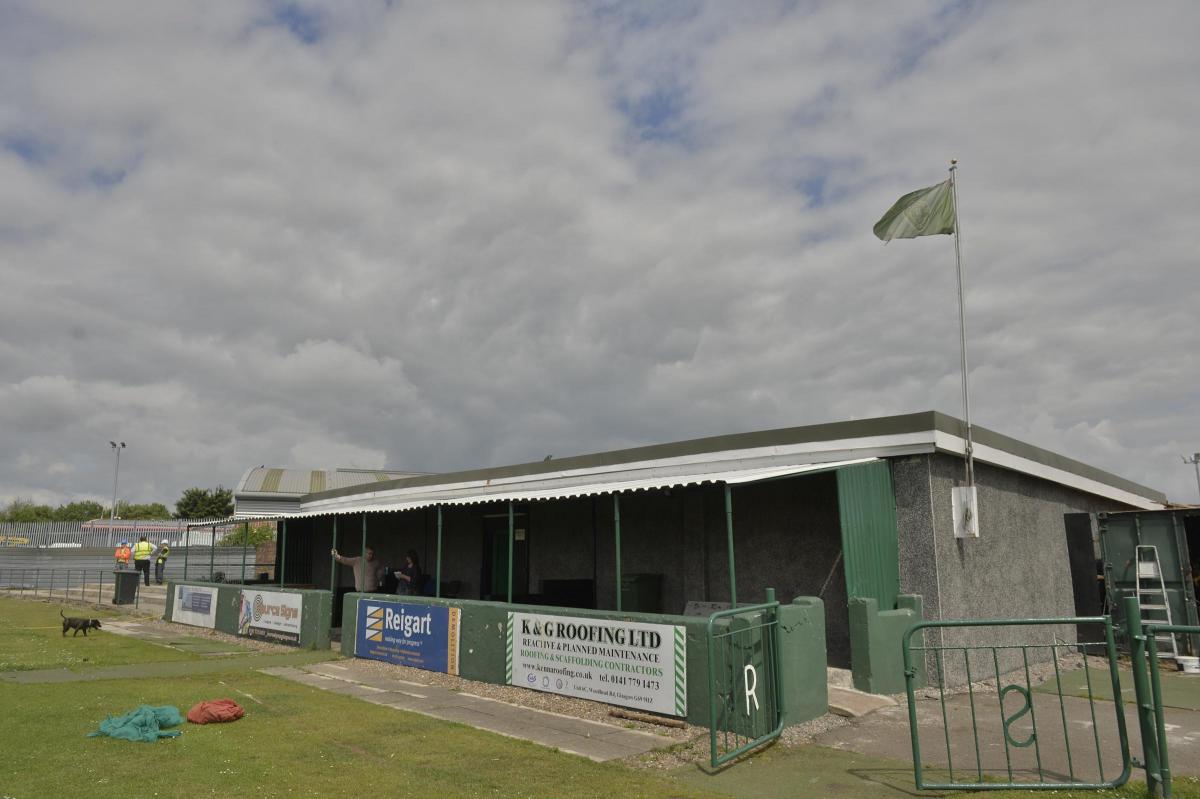 There are a good number of Scottish football teams that take their name from saints but since today’s club is named after the patron saint of bachelors; St Roch’s, of the SJFA West Region Championship, will probably be perfect for me. If you’ll allow me to put my weekday RME teacher hat on for a moment I can tell you that Saint Roch was an early 14th century Catholic Saint & ascetic, born of noble stock with a red cross shaped birthmark upon his thigh. Turning down the opportunity to inherit his father’s title as Governor of Montpellier, he travelled to Rome and miraculously cured plague victims along the way. (This is despite the generally accepted year of St Roch’s death being some twenty years before the Black Death hit European shores.) Eventually he returned home, but was imprisoned by his uncle as a spy before dying in incarceration. Along with unmarried men he is also the patron saint of dogs and the falsely accused.

‘The Candy Rock’ have two major claims to fame, the first being their connection to a man who many believe should be canonised for his achievements on the pitch; Jimmy McGrory the top British goalscorer of all time. McGrory’s stats are indeed miraculous with five hundred and fifty career goals, 469 of which coming in 448 games over a fifteen year spell at Parkhead. In the green & white hoops of Celtic he scored fifty five hat tricks and eight goals in a single match against Dunfermline Athletic in 1928. What is less known about McGrory are his origins at his local club; St Roch’s Boys Guild where he began playing at age eleven. By 1920 St Roch’s were fielding an adult side in the Glasgow Junior League and during their second season a young James McGrory was drafted in to play on the wing. His arrival marked the beginning of their greatest season ever, which culminated in The Candy’s sole Scottish Junior Cup victory.

St Roch’s didn’t have an easy journey to success in Scottish Cup. On the route to the final they saw off a number of quality sides like St Anthony’s, Bellshill Athletic, Auchinleck Talbot and Rutherglen Glencairn. In the final at Firhill McGrory scored the winner and the trophy was held aloft, however The Candy had a major problem. Defeated finalists Kilwinning Rangers claimed St Roch’s fielded and ineligible player and the SJFA upheld The Buffs complaint. Both sides returned to Firhill for the match to be replayed in front of 32,000 where an identical 2-1 result was the outcome, this time McGrory scored the opener.

Many others Bhoys have made the short hop from St Roch’s to Parkhead; the brothers Brogan being two fine examples. Frank Brogan was first, moving from The Candy to Celtic in 1961 for a three year spell during which he scored the club’s 5000th league goal. Moving down south he played over two hundred games for Ipswich Town scoring sixty nine times from midfield. Younger brother Jim is a bonafide Celtic legend; a nine in a row winner under the tutelage of Jock Stein, he missed out on being a Lisbon Lion but did play in the 1970 European Cup final against Feyenoord.

The second thing of note about St Roch’s is the club’s commitment to philanthropy, being founded with a focus on Christian charity in an area of Glasgow then suffering from huge levels of poverty. The Candy Rock are still dedicated to helping those in need today as the committee at James McGrory Park host Christmas dinners for pensioners, provide summer football camps for kids and make sizeable donations to local foodbanks.

I’ve heard of other clubs doing similar things but The Candy don’t stop there. In collaboration with Glasgow University St Roch’s has provided local school pupils with free tutoring ahead of SQA examinations and worked with an amazing charity called The Invisibles to help alleviate the city’s homeless problem. How many other football teams in the land can be said to help young people maximise their educational opportunities while inviting in for a fish tea those who have nothing? As one Glasgow based journalist writing about the side said: “At St Roch’s it is obvious everyone is united by community, charity and social justice”.

It’s a fair hike up to the Garngad area of town but the number 19 bus is every fifteen minutes, runs the length of Royston Road and drops me off right outside my first pub The Garngad Bar. Not much to look at from the outside, just a white concrete box with green doors, but inside there is plenty to see once your eyes adjust to the darkness. Clearly a Celtic pub, the walls are covered in green & white mementos including a big canvas of the recently passed Billy McNeill holding the European Cup aloft.

It is only the back of eleven but a number of regulars are already comfy in their usual spots. One cantankerous old bastard is angrily shouting the odds at his fellow drinkers about an issue the barmaid says has been going on a while. No one engages with him so he’s soon back to his paper, grumbling under his breath. Disturbance aside the Garngad appears to be a sleepy local pub with visitors from out of town a rarity. That said Guinness at £2.85 is some saving on the average £3.30, making popping in worthwhile.

I start getting a little nervous as I stray off the main road for pub number two; The Budgie. First I pass the council recycling depot then an area of wasteland before arriving at another concrete block of a building with rubbish lying about outside. Inside is like nothing I had anticipated however, as it is spotlessly clean and beautifully furnished. One wall is covered in bookcase wallpaper and the others in a faux brick design. I’m the only one in before an elderly gent joins me and I question the existence of this pub seemingly in the middle of nowhere. Turns out the wholesale market across the street was once a massive affair, big enough for a pub to run on the custom of it’s workers. Back in the day it was open from seven in the morning for those coming off the night shift. As nice as it is, with the singular regular and woman behind the bar both lovely, I dunno how it drums up enough customers nowadays to keep the doors open.

My final venue is much further up Royston Road and passed James McGrory Park; Gordon’s, where every eye in the room is fixed on the live Celtic game. This pub scrubs up very well indeed; a big room with half a dozen tellys and a wee bar in the corner. A pool table sits in the middle with plenty of room around it and out the back door is a huge beer garden and a marquee for times when it gets really busy. A Famous Grouse is two quid but for that you get 35mls so I enjoyed a couple of whiskies and Diet Coke.

I’m given a tremendous welcome at James McGrory Park having to insist on paying entry and being given a full tour by the team’s manager. The grass pitch looks lush and is surrounded by a metal railing. Like Lochee United the main building is behind the eastern goal and contains the changing rooms, committee room and an excellent bar. The bar is the first Junior one I’ve seen to have modern décor, with giant club badges and massive team photo decals plastered on the walls. No draught beer here; just cans, bottles, a small selection of spirits and fantastic bridies on offer at perfectly reasonable prices.

Back outside I can see JMP is certainly unique and full of character. Brick walls are covered in graffiti art including a portrait of McGrory and, in giant letters, the inclusive message “No one is illegal”. The Royston Road side has concrete terracing, two new covered areas not quite yet finished and a further covered area (again like Lochee) extends from the front of the main building. Overall it is totally gorgeous and, despite the Celtic game, pretty busy at kick-off.

The Candy needed all three points today to guarantee Championship football next season yet it was a fit looking Neilston side that went on the attack in the opening minutes. As St Roch’s settled into the game an end to end battle commenced on that lush yet smallish looking pitch. A goal came midway through the half and it was for the home team; Logie sticking it in the net to the delight of The Candy faithful. The scoreline remained the same until half time.

If the first half brought the home support joy the second only provided despair. Dylan Fletcher nodded in an equaliser for The Farmer Boys before controversy arrived around the 75th minute. In my view a St Roch’s player was fouled at the edge of his box but the referee allowed play to continue with that player down. Seconds later a Candy defender blocked a shot and the whistle was blown for a penalty. Surrounded by Neilston fans at the time, even they were perplexed as players argued in vain with the official and Paul Stewart slotted the spot kick away. St Roch’s went for an equaliser but it never came; Neilston take all the points and The Candy still aren’t safe from relegated.

At full time I have a final can before being invited into town for a beer by a group of guys before I catch the train. On the way home I think about my day at a nice club with a great ground and a decent team on the field. Yet St Roch’s are much more than that, far greater than the sum of its parts and so very special.

Today I visited a club that does so much for those in need, but rather than pride themselves on it they are humble and it’s barely discussed. I know from my travels that many Junior clubs live a hand to mouth existence, yet The Candy use what little they have to feed (often literally) those in greater need. Remember I talked about local pupils getting free tutoring? Well today I was told that one recipient of that extra free education is now off to Oxford; somewhere few, if any, will have gone to from this community. They care about the football for sure but their dedication to making lives better off the pitch looks to be the bigger aim. That deserves some recognition in my opinion and I hope this blog gets them some.

Finally this afternoon St Roch’s treated a stranger like an auld friend, all those involved in the club from committee to fans made me feel welcome and at home. My hand aches from shaking so many others. Yeah they knew I was coming to write about the place but I know for a fact that any new face arriving at the turnstile would be greeted similarly. That alone would make The Candy Rock brilliant but as I said there is so much more to them than that.